Vast expanses of space and silence, and blazing summer sunshine. Across the arid landscape, the Orange River flows

The Northern Cape is situated to the south of the Orange River, and comprises mostly of arid, desert terrain. Prosperous towns and villages have taken shape along the banks of the river that snakes its way into the Atlantic Ocean, and the surrounding land that was once barren and only populated by groups of nomadic Bushmen, was transformed into lush fields of crops such as cotton, dates and grapes.

The region’s prosperity does not end there. Kimberley, the province’s capital is known as the diamond city, given its name after the diamond rush era of the 1870s. Hordes of miners converged on the region, sifting the waters for the treasure and leaving the Big Hole behind them; one of the biggest hand-dug mines, plunging over a kilometre into the ground.

More wealth in the region comes in the form of copper mining too, and the region is thought to be one of the world’s most productive fishing areas. One of the region’s most natural riches is the torrent of colours seen stretching across the wilderness of the dusty plains along the Namaqualand flower route. 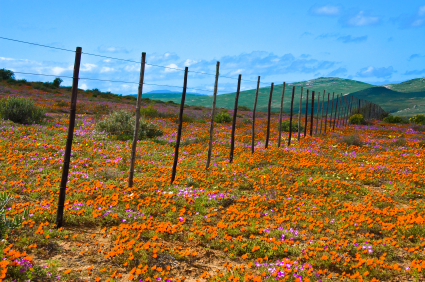