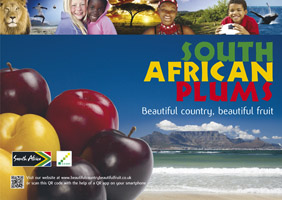 South African growers are launching QR codes inside packs this season as part of their on-going campaign to support sales of SA fruit.

The codes, which when scanned direct smart phones to a specially enabled website about South Africa and its fresh produce, will feature on in-pack leaflets during the seasons for plums, peaches and nectarines, followed by apples and pears from the country. They will begin to be used from December/January.

The technology is one of the additions to the promotional initiative to boost recognition and sales of South African fruit, as it enters its third year. Social media will also feature for the first time for South African produce this season, with activity on Twitter and Facebook supporting activities taking place both in store and in the media.

The 2011/12 promotion begins on stone fruit in December. As well as focusing on the season, eating quality and varieties from South Africa, it will draw on research findings that suggest eating fresh plums, peaches and nectarines gives the skin a naturally beautiful glow. The academic study was carried out by Dr Ian Stephen, and shows that consumption of dark fruits affects skin tone in such a way that in tests it was rated the most attractive. It is the second year South Africa has worked with Dr Stephen to highlight to shoppers that plums, peaches and nectarines are delicious during the winter season – but also make you more beautiful.

The ‘Winter Beauty’ theme has been developed to include public relations broadcast activity such as internet video interviews, but will also feature in online advertising this year. In-pack booklets will contain details of the competition, and will also include information on varieties, availability, and recipe suggestions.

Customers also have the chance win a trip to South Africa, as well as beauty products and in-store shopping coupons. Sampling will take place in supermarkets nationwide during the season, giving customers the opportunity to try South African plums, peaches and nectarines.

Following a successful winter tasting lunch by Marcus Wareing at the Berkeley Hotel in London during the season in 2011, another event is being organised to showcase the eating quality of particular varieties of South African stone fruit to consumer and trade journalists and other food writers.

Jacques Du Preez, Product Manager for Top and Stone Fruit at Hortgro Services said: “Since we launched the pilot project to promote South African plums in 2009, the Beautiful country, beautiful fruit campaign has grown in stature to become one of the most significant in the fresh produce category. It is helping build shopper loyalty by highlighting the uniqueness of South African fruit; from the freshness, eating quality and speciality varieties we produce, to ethical and environmental reasons for customers to eat our stone and top fruit while it is in season and eating at its very best.”

“The activity we are unveiling this year is a part of our commitment to supporting the development of South African fruit in the UK – and to improving the tools we use to do this on an on-going basis.”

–          The Citrus Growers Association of Southern Africa has also run a campaign to promote grapefruit during the British summer for the last two seasons.

–          Nine of the UK’s multiple retailers have been involved in the Beautiful country, beautiful fruit campaign since it began in 2009